Back Stage Pass to Dream Careers 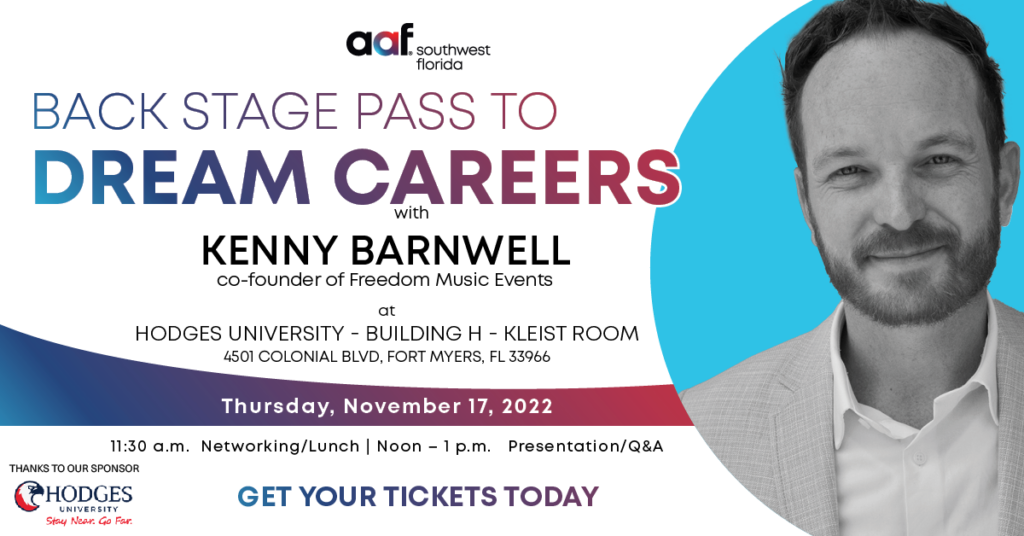 From stagehand at 18 to event production extraordinaire, Kenny Barnwell has learned a thing or two about making career dreams come true. He’s the co-founder of Freedom Music Events. He’s worked with many artists, including Travis Tritt, Clint Black, Justin Bieber, Ariana Grande, Seal, and more. Kenny is going to share his career C.O.D.E. with us. Join AAFSWFL to hear how Kenny built his dream career, and how he pays it forward. You’ll leave this session with a renewed sense of purpose, energy, and inspiration!

Get your Ticket HERE!

He’s built a 20-year career working on tours in Backline, and as a Stage

Manager, Production Manager, and Tour Manager on tour with artists such as

He is the co-founder of Freedom Music Events, a concert promotions

backstage crew career courses, and the creator of CREW COACH a career

WHY YOU SHOULD JOIN AAF-SWFL

Connect with a diverse community of SWFL advertising industry peers who actively engage in local, district, and national initiatives.

Our nationwide network monitors ad-related legislation on local, state, and federal levels so your business remains free to thrive.